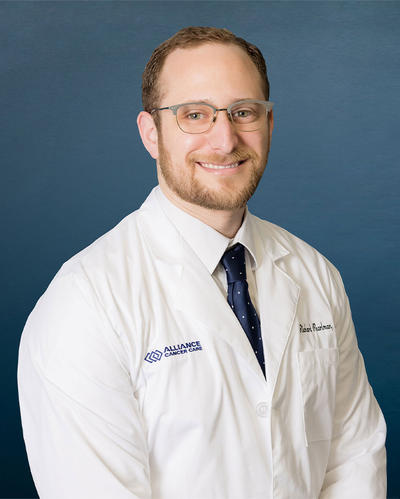 Dr. Pearlman was born and raised in Birmingham, Alabama. He attended Birmingham-Southern College in Birmingham, Alabama, as an Honors Scholar and graduated summa cum laude with a Bachelor of Science in chemistry and received his medical doctorate from the University of South Alabama College of Medicine in Mobile, Alabama, where he was inducted into the Alpha Omega Alpha honor society and received the Dean’s Award upon graduation. Following medical school, he completed his internship at Brookwood Baptist Health in Birmingham, Alabama, and his residency in radiation oncology from Wayne State University in Detroit, Michigan, where he served as Chief Resident his final year.

In addition to his education and medical training, Dr. Pearlman has been awarded numerous honors and has authored several articles in peer-reviewed medical publications.

In his free time, Dr. Pearlman enjoys landscape photography, hiking, kayaking, and camping. He is married to Dr. Hailey Park, who practices as a dentist in Muscle Shoals, Alabama.